I had a baking lesson on Sunday with my Finnish sister-in-law Ilona. She baked while I took notes before having a little sample at the end. 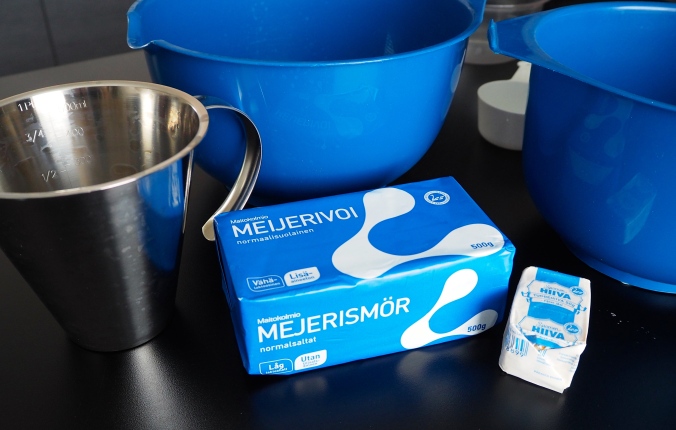 This dough can be used to make various sweets. To make enough for korvapuustit, a few munkit (doughnuts) and rahkapiirakat (quark pies), follow these easy steps:

Heat 5 dcl (500ml) of milk until it is slightly warmer than body temperature. You can use water if you are lactose-free. Crumble in one packet of tuorehiiva (fresh yeast) and stir to dissolve.

Add 1 dcl white sugar, 2 teaspoons cardamom, 2 eggs and mix. Stir in 9 dcl of plain flour (unsifted) and a pinch of salt. Once the mixture becomes thick and sticky use your hands to mix. You want a balance between the dough being thick enough to roll and loose enough so it has enough air in it to rise. 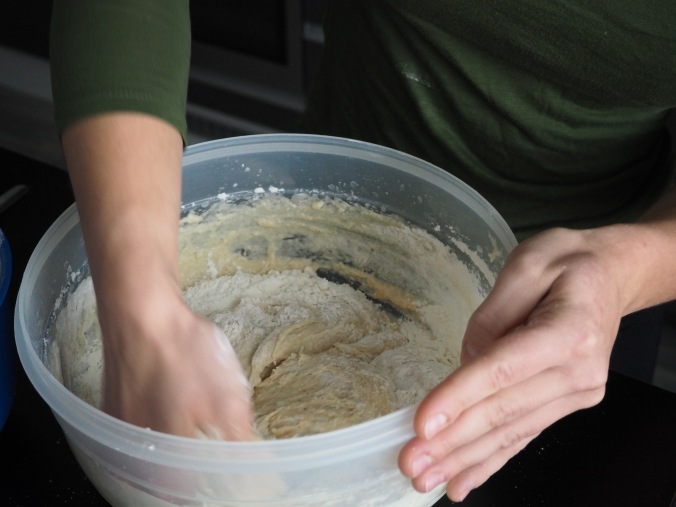 Add 100g of melted butter and lightly mix with hands. Don’t knead too much as the dough needs to stretch.  Now it needs to double in size so cover with a tea towel and put aside. A 1950s tea towel printed with Australian birds is always best. 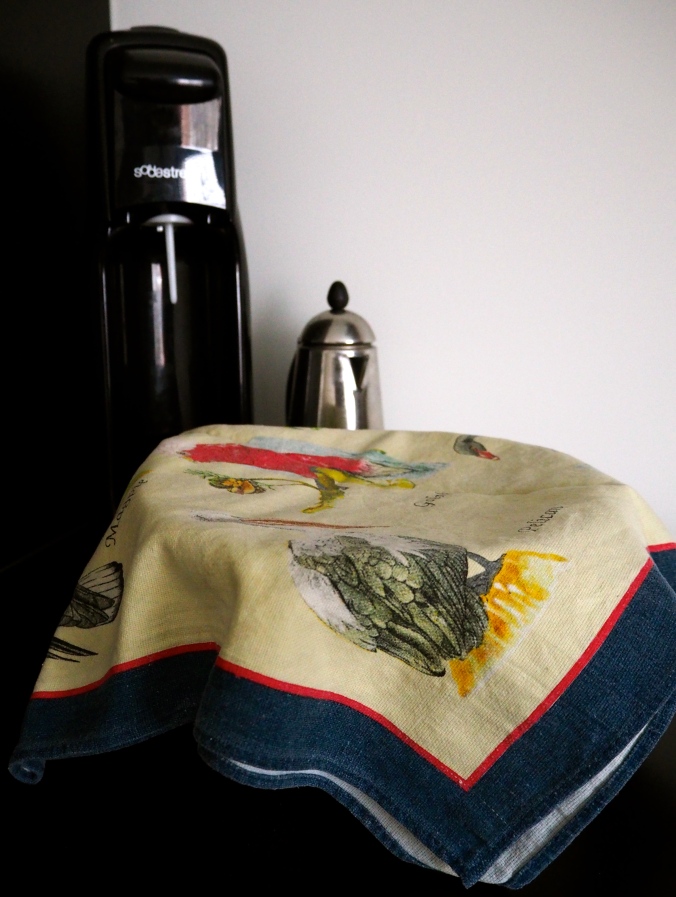 Heat the oven to 200°c. Once the dough has doubled in size scrape it out onto a floured surface. When making korvapuustit you can be quite rough with the dough, it’s okay to push a bit of the air out of it. Divide the dough and put aside the amounts you would like for doughnuts and rahkapiirakat.

Roll the dough into a 1cm thick rectangle and brush with 25g of melted butter. Sprinkle with cinnamon and sugar and then roll lengthways. 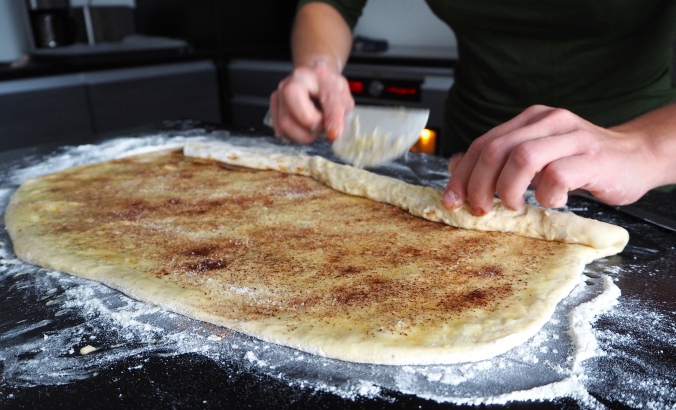 Cut the dough into triangles with the edge of a spatula. You can freeze uncooked dough at this stage to bake later. 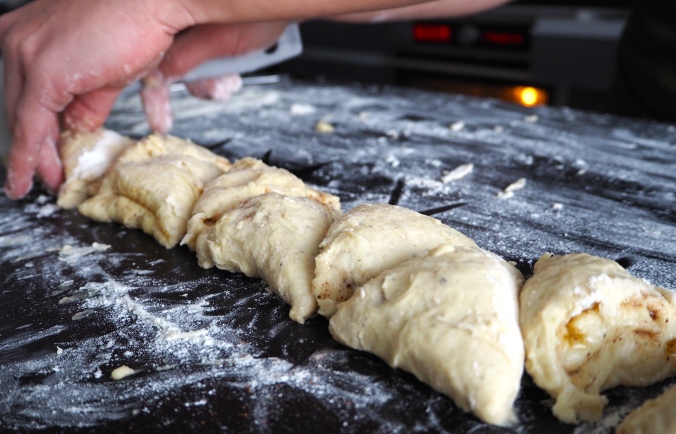 Place the triangles on a tray lined with baking paper. Put them on the bottom edge of the triangle and push down (like you are squashing a pyramid). 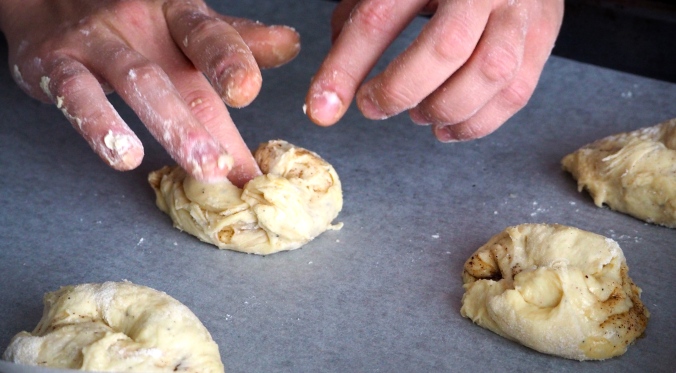 Leave a bit of space between them as they will grow. Brush with egg and sprinkle with pearl sugar. Bake in oven for about 15 minutes or until golden. 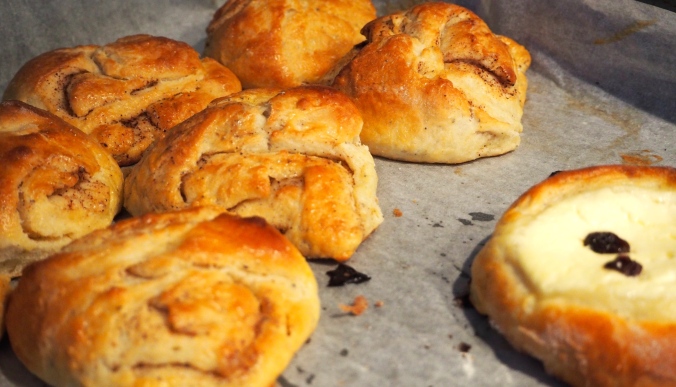 For rahkapiiraka: These are easier to make if the dough has come from the freezer. Shape dough into little dish shapes with a slight well in the middle. If the dough is fresh poke a couple of little holes in the bottom with a fork. Brush with egg and then mix one tub of rahka (quark) with the leftover raw egg and 1 teaspoon of white sugar.

Spoon the mixture into the wells and press in raisins if you like and bake in oven for about 15 minutes.

For the doughnuts: Shape dough into small rounds with the side of your hands. Don’t be too rough as you want air in this dough so they will rise. 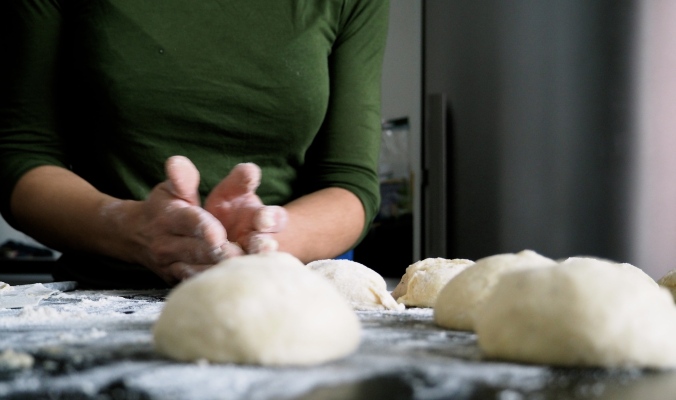 Take a round of dough and punch a hole in it with your finger. Then stretch a bit by spinning the ring on your fingers. This makes a sturdier doughnut shape than if you were to make a sausage and join two ends. You can freeze the raw dough circles at this stage for later use, or fry in oil and coat with sugar when cooled.

Yum! All three of these sweet snacks are best served warm with coffee on the couch while you watch the Men’s 50km cross-country skiing final.

Apologies to Ilona for not getting more photos that included her lovely face. I would have also included more photos of us eating these delicious snacks but some of us were still in our pyjamas…