If you’re at a party and a New Zealander says to you “Well, we’re probably going to start thinking about heading off sometime soon,” it basically means: Say goodbye, we are going. Finnish people, from what I can tell, are much more direct. For example, unless you always takes the stairs, you will be familiar with the Finnish elevator company, Kone. Kone means machine. Enough said. 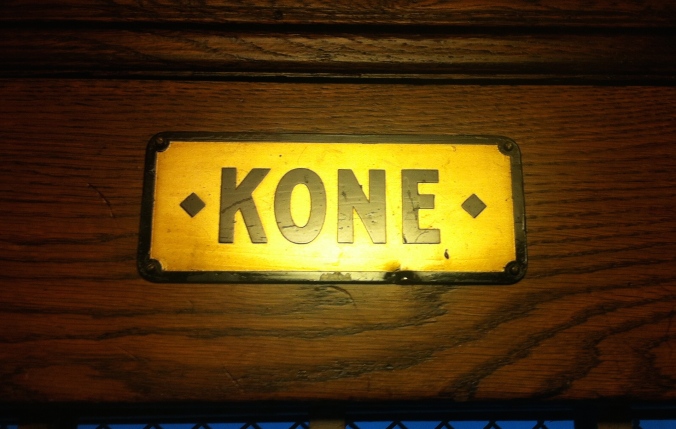 Kone – making elevators since they were made out of wood

So I love the name given to the recycling stations found in most supermarkets and grocers here – the reverse vending machine. Instead of putting money in and getting a bottle out, you put bottles in and get money out. Brilliant.

I mentioned here earlier that there is no plastic recycling in our apartment building. However the return rate of recyclable plastic bottles, glass bottles and drink cans in Finland is over 90%! The scheme works so well, with the return on containers set at 0,10€ for glass bottles, 0,15€ on cans and up to 0,40€ on plastics. This is refunded in the form of a voucher that can be spent in-store or sometimes as money from the cashier. Some machines also provide the option of donating your refund to charity.

Woo hoo – its like winning the lottery every time!

After spending a few days in Helsinki you start to notice there’s a community of people who make their way around collecting used cans and bottles to earn a bit of cash from recycling. After a big festival or event like Vappu (May Day) it’s not long before the streets and parks are cleaned of leftover rubbish. In fact people deliberately leave bottles and cans out for those who collect them, to save them having to sort through the city’s bins.

I did wonder what stopped someone from just wheeling the whole recycling bin out of our apartment building down to Siwa to help fund their grocery bill but had it explained to me that not all bottles and cans are eligible. A Corona beer or imported wine won’t necessarily have the required pantti mark on it. This is the deposit paid when purchasing these items that is refunded when returned to one of the 4000 or so reverse vending machines across the country.

Karhu = bear so its Bear Beer

And here’s an interesting fact: glass bottle recycling was first kick-started by the introduction of Coca-Cola into Finland during the Summer Olympics held here in 1952. Since then Finns keep topping world statistics in recycling rates and the number of cans returned in one year is estimated to be able to reach around the globe three times. I’ll be looking for a job soon but in the meantime will be doing my part in reclaiming some of the EUR 310 million generated by returns annually. I’ll drink to that!

4 thoughts on “The Reverse Vending Machine”